The Last Of Us Remastered PS4 An Appreciation

Wow Its certainly been a while since I’ve last blogged. I cannot help feeling that its like a dilapidated old house that is in need of a refurbish to bring it back up to par, so I have decided to write about “The Last Of Us” a game by Naughty Dog of Uncharted fame (and many other things which you should definitely go look up).

Its been one of the few games lately that has sparked a real excitement in me, it didn’t feel a run of the mill job where profits were put in front of creative effort and fun. Its not often that I have completed a game 4 times in a relatively short-ish amount of time and not feel bored, because there were often things that I missed and wanted to go back and explore, or even just to drink in the wonderful visuals that the upgraded version on the PS4 showers your eyeballs with.

But before I get too ahead of myself I should talk about what the game is, its a 3rd person action/stealth/horror game, but lets ignore that for now.

The story concerns a bacterial infection which has spread across the globe at an alarming rate, ushering in the possible doom of the human race. The infection in question makes anyone highly aggressive much like its zombie brethren in other fiction, yes its one of those settings where the world is on its downwards teeter on the cliff of no return into the sea of extinction, but to be honest the main draw of the story is about the interactions with the characters and the characters themselves. What they have been through and how it has shaped them as people, sure the world is falling apart but I want to see where our characters relationship (Joel) with his charge (Ellie) develops throughout the course of their exploits in the game. 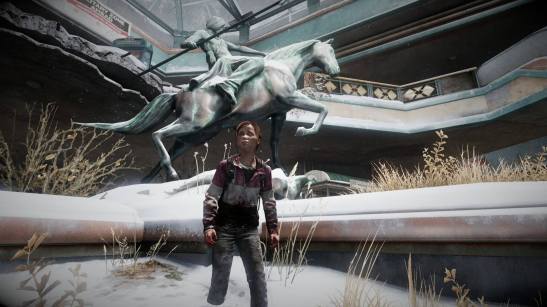 Its not often you see a game with as many strong female leaders as this does, but what makes it extra special is that none of them are Clichés, they are not (putting It crudely here) tits for show or the damsels in distress. They are real people getting by in an increasingly savage world which is refreshing in an industry that is pre-disposed (perhaps a little less so these days) to glorifying and objectifying women than taking them seriously. And they are brilliantly brought to life by the likes of Ashley Johnson (Ellie), Annie Wersching (Tess) and Merle Dandridge (Marlene).

That’s not to say that there aren’t great male performances either, Our main character Joel played by Troy Baker does a brilliant job as a gruff man who lost his daughter at the start of the outbreak, very little issue with what needs to be done to survive whether that be killing, stealing or whatever which can leave for a peculiar moral grey zone as you end up asking yourself would I have done that? Or you might also consider the context of societies break down where perhaps you would have no choice but to revert to being nasty and opportunistic to stay alive? Which is really gripping and utterly absorbing as you get taken along the path that the story takes you so you can find out the answers to those questions, if there are any at all.

Now for me personally I want to give a special mention to Nolan North, I freely admit that this could be me completely fanboying out (During a game of Saints Row 4 you had the opportunity to give your character Nolan North’s voice, you can bet your ass I chose it!) but I thought he was especially brilliant doing his dark turn playing the sinister “David” This might seem a little bit strange but its because he’s mainly known for his work as a good guy or at least a positive character, his performance was on point and deeply disturbing, from the beginning where you were not sure of his intentions to his outright creepiness when he imprisons Ellie you certainly wont forget him in a hurry.

The Last Of Us is a great game and im super happy to have finally got on board with the millions of other people who have played and loved this game, if you have never had the chance to play this before I thoroughly recommend that you check it out (The remastered edition in particular on PS4)

Its good to be back 🙂