It’s that time again, this movie time I just had to do “Machete Kills” which is the sequel to the awesome “Machete” which if you haven’t heard of I did a write up of that a while ago here.

This time around the cast is vastly expanded such as Sofia Vergara, Antonio Banderas, Cuba Gooding Jr and even Lady Gaga. It’s a hell of a cast built on the success of the first movie, we get a brief introduction to them with a “trailer” of another “movie” called Machete Kills Again….. In Space, and when you consider that the first movie was built around Mexican immigration into the united states its somewhat out of left field, but they pull it off so well, they even manage to cram in a star wars reference or two in their with light-sabres in the shape of a machete….

After the riotous start we get to the actual movie, and within a minute all hell breaks loose and we get a metric fuck ton of bodies, the highlight being when Machete jams his Machete into an electrical box and grabs a bad guy which in turn fries the bad guy, I’m not sure if that would actually work! But it was really cool nonetheless.

It is in this skirmish however that we lose Jessica Alba in her brief cameo when she gets killed by a masked villain, rather a short role but at least it’s a nod to the previous film and adds a little bit of continuity.

It’s after this traumatic event that we get down to the nitty-gritty of the story, or what stands for a story, presented to us by none other than the United States President… That’s right, Charlie Sheen using the name “Carlos Estevez” is President Rathcock, It’s all apart of the joke and again it’s absolutely brilliant. There are some nods to sheen himself too as Machete ends up calling him while the president is asleep in bed with three beautiful women, if you ever kept up with Charlie Sheen you’ll recognise the reference :).

Remember that story I mentioned? In a nutshell the president needs Machete to stop a madman in Mexico from firing a missile at Washington, that’s about it other than the presence of a secret villain secretly in control of everything *cough* Mel Gibson *cough* but the story shouldn’t be your focus.

The charm, the fun, the humour come from the chemistry and interactions of the characters.

Characters such as the Assassin “The Chameleon” who literally changes faces, he/she is one of my favourite characters in the film. Chameleon is played by several actors and an actress each time he/she changes faces, so they bring someone new in each time. Walter Goggins being the first face, then Cuba Gooding Jr and funnily enough the next face is Lady Gaga. Since she isn’t an actor her lines are kept to a bare minimum, but to her credit she can pull off menacing rather well, the visuals of the movie really enhance her look so that she seems right out of a comic book, the effect looks superb.

The villains in the movie are certified Grade-A crazy from the split-personalities of “Marcos Mendez” (switching from utterly psychotic to a slightly less crazy revolutionary) to “Luther Vozz” played by the one and only Mel Gibson, just as crazy but more of a comic book/James Bond villain when compared to Mendez. He is my favourite out of the two, so brazenly arrogant, but he has a certain charm to him, he epitomizes the humour in the movie he definitely is a funny guy.

Its all about the spectacle, and Machete Kills does not disappoint. How about attaching a grappling hook to a rotating helicopter blade which swings him about at incredibly high-speed while he has his machete out decapitating fools foolish enough to get in range.

A personal highlight was seeing Sofia Vergara don a bra with Gatling cannons attached to each cup, and a high-powered revolver attached to a strap on. Which fires with each hip thrust, its a hell of a spectacle let me tell you.

Of course though you just have to see it and you’ll get what im gushing about. If you manage to catch it in the stores, don’t think, just buy it, you wont regret it. 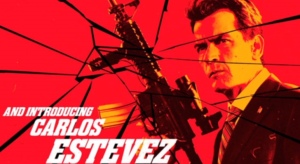