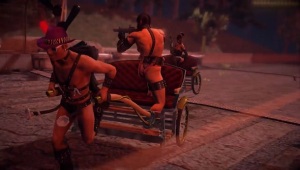 I wasn’t planning on doing anything for the Saints Row dlc’s due to me only just playing them, and them being out for a good long while now it was just going to be a guilty pleasure, or just simply a pleasure to return to the silly mayhem and downright outlandish world of Saints Row 4….

The series originally was played out as the antithesis of the Grand Theft Auto games, that with its serious/realistic take on their story and visual design etc. Where as Saints Row took the opposite route with a view to being more fun than GTA, this was all well and good until they took the decision to get wackier with each edition until you get to SR4 which involves aliens, superpowers, robots, being the president of the USA, you get the idea.

Getting back on track….

Enter The Dominatrix is in fact not a very good DLC if you look at it from a gameplay point of view, it’s incredibly short and it doesn’t have a whole lot of variety attached to it among other things. As a comedy it’s really really good, encounters in an S&M club, meeting an old friend with an auto-tuned voice and having to fake giving him a “good time” to get in good with the Dominatrix’s right hand man called DOM (the dominant, it’s an S&M thing). If that doesn’t float your boat, how about a chariot race which are pulled by blokes in gimp suits while you blow up the competition, giving you a competitive advantage.

Its funny, and a lot of fun, but its over far too quickly. One thinks the developer was aware that it was a bit thin on the surprises, so with the ending, that’s where it gets batshit crazy, and if I might add, absolutely brilliant.

Raptors….. Singing Raptors….. The Raptor King….. And more, it was AWESOME!

Seriously one of the best, and most unexpected endings to any game, ever! And for me it made all the other missions in the DLC worth it.

Well done Volition, you are clearly insane….. But don’t you ever change

Thanks for reading
Dave