The Wolf Among Us Episode 2 “Smoke And Mirrors” (Spoilers)

After an absence from our consoles for a good few months, The Wolf Among Us returns with episode 2 “Smoke And Mirrors” 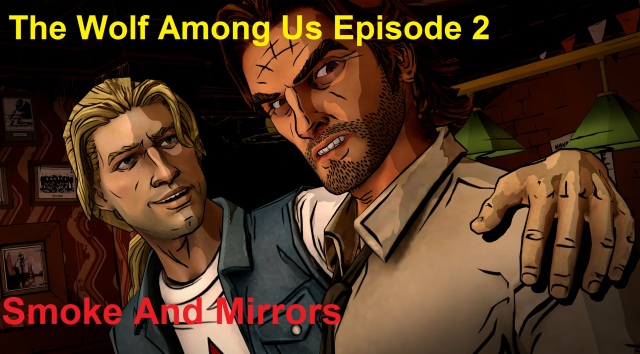 We reprise our role as “Bigby” the big bad wolf, sheriff of Fable Town situated in the middle of new York city. As you can imagine trying to keep the peace and secrecy of a town full of fairy tale characters. Appearances are kept up by a magic spell known as “Glamour” which gives our fairy tales human appearances, and this is a part of what makes this game an utter feast for the eyes. A squat Mr Toad, gruff sheriff Bigby or even a stripper/prostitute “Little Mermaid” suffice to say this is an adult retelling of the classic fairy tale characters.

So, following on from Episode 1 we have witnessed two grisly murders, both by decapitation, one, of a girl named Faith, and the other who is/was Snow White. This is very much a murder-mystery story, we start at a police station where Bigby is being questioned by the “Mundies” (The Mundane) in other words regular humans, they get no where, and thankfully the scene doesn’t drag on too long because the entire police station gets there memories wiped by an elusive magic spell, allowing Bigby a clean escape and the opportunity to clean up any evidence of Fable existence.

The music of course is superb, it really adds to the foreboding, tense atmosphere.

As Bigby and our rescuer Ichabod Crane drive away calm as you like from the police station they talk about what they’ve previously witnessed, namely the murder of Snow White. Their dialogue is great and never gets boring, that’s one of the things I especially love about this game, the writing, none of it feels un-needed or pointless. The Metal Gear Solid writers could take a few lessons from these writers in my humble opinion, as there were so many redundant lines of dialogue in the MGS series that the endless cut scenes always became a chore to sit through, you do not get that problem with The Wolf Among Us.

During this exchange we find out that “Blue Beard” (whoever that is, I’ve never heard of that fable) is Interrogating (Torturing) Tweedle-Dee as it is believed that he has information on the killer of Faith and Snow White. Problem with that? Snow White isn’t actually dead, just as we get stuck into the interrogation of Tweedle-Dee with Bigby, Snow White walks into the boiler room that we have tied up and bloodied Dee.

So just who the hell was murdered if it wasn’t Snow White? It just so happened to be a troll named Lily, sister of Holly from the Trip Trap Pub, what was Lily doing Glamoured up looking like Snow White?

The mystery takes us to a strip joint called the Pudding & Pie, a place owned by a scum bag called Georgie (according to the extras menu his fable name was Georgie Porgie? Never heard of him, but yet another character with an English character with a seedy demeanour, typecast much? But as a sort of apology we at least get to smash-up his club in our chase for information and ultimately the killer. Georgie does try to stop you with some reverse-psychology, repeatedly egging us on as it’s what we are, and all that we know how to be (Violent).

As a result I tried to limit the wanton destruction to his DJ Booth and his TV, but we have found what we’ve come for, and if im honest we’ve found even more because as we initially walk into the club we see a naked dancer bearing all her assets, and just who is this dancer?

It’s the Little Mermaid, as a stripper/prostitute.

She has fallen on hard times the same as Faith and Lily, so you do what you have to, to get by. 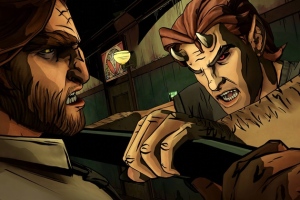 Its her that gives us the information we really need, namely the last place Lily was seen before she was murdered. It’s a run down hotel called “The Open Arms” a run down joint which could only serve as a front for prostitutes to work their clients. Just before we can get to Lily’s room we have to deal with a jealous Beast, since Beauty is the receptionist of this dump, he jumps to the conclusion that Bigby and Beauty have been having an affair. While an understandable assumption, this results in an entertaining fight where Bigby and Beast get into a fight, and QTE mayhem ensues, awesome!

After this peeters out with beast realising his mistake, we manage to get into room 207, the room that Lily was last known to be. The door was previously locked, so how did we gain entrance? We crashed through it during our fight with beast, effective if messy!

This is where we see that Room 207 was the place that Lily was Murdered as her bed is absolutely covered in blood.

Not a pretty sight.

The investigation produces evidence as to who her killer was, one Ichabod Crane. However questions remain if he was Faith’s killer? As hers wasn’t so blatantly a ritualistic killing, plus many more questions still swilling around, hopefully to be answered in the next three episodes.

After completing episode 2, my final conclusion?

I want the next episode right now!

It’s the best episode so far…. Out of the 2, but still, it’s so good. The atmosphere, the writing, the art style especially (which is stunning) Its a wonderful story game.

By that I mean it tells an engrossing story presented with beautiful visuals, but as a traditional game? It’s about as complex a game as a click here to continue sort of game. But if you play this for the game then your probably not the sort of person this game is targeted at, this is all about the story and the experience it gives to the player.

I love it to bits and can’t wait for more

This entry was posted in Gaming, Personal Thoughts, Reviews/Retrospective and tagged bigby, Games, Gaming, opinion, review, smoke and mirrors, snow white, telltale, the wolf among us. Bookmark the permalink.