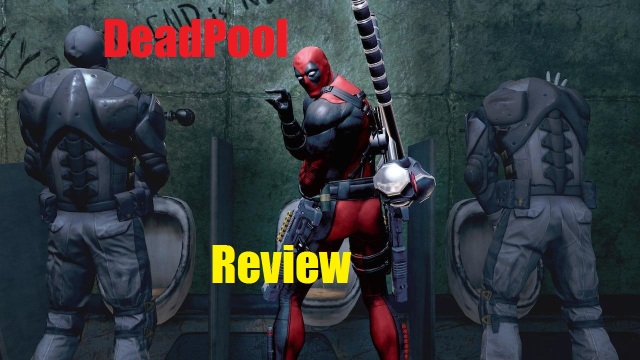 So who the hell is DeadPool? And why did I want to get this game?

Well, DeadPool is a comic book super-hero (of sorts) from Marvel Comics and to be honest I had never heard of him until this game came out. But im glad I know now as he has quickly become my favourite comic book character out of the whole lot. He has an accelerated healing factor and the ability to teleport (as far as the game explained at least) but what makes him unique in my eye at least, is that he’s totally batshit crazy.

However that’s not The Joker crazy, Deadpools crazy is more voices in his head played out for comedy effect, which affects his overall personality into somewhat of a joker and complete air-head, but a kind of loveable one at the same time. This is played out extremely well in the game because there are a ton of 4th wall breaking jokes and references to the player etc. It creates the effect of that he’s sitting right there with you while playing the game, the fact that he’s so self-aware in his own game is awesome and at times incredibly funny. 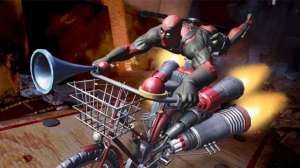 That brings me to the humour in the game, as this game should be classed as a hack and slash comedy. The jokes and references keep up a quick fire pace, there’s little subtlety here, references to fangirls with big boobs, dick and fart jokes etc. Its all there and of course completely and unashamedly unsophisticated, but that adds to its charm because it doesn’t carry any pretension, all its there to do is to make you laugh and have fun. There is a caveat to that though, because of the amount of jokes that get made it threatens to grate on your senses because there isn’t really a breather from them throughout the entire game.

It does hint of throwing everything at you and seeing what sticks, which works I suppose, if you tell joke after joke, by probability your going to make someone laugh eventually. Again subtlety is a dirty word in this game.

So what about the gameplay in of itself? Well its your run of the mill hack and slasher, with light and heavy attacks with gunplay thrown in for good measure. It also includes a basic upgrade system, making your weapons slightly more powerful or giving your fire arms extra ammo, pretty basic if your familiar with this particular genre. That’s not to say that the combat isn’t fun, its satisfying and as you buy new weapons you can experiment with your preferred set up, or if your just bored you can switch weapons mid combat with the D-pad much like Devil may cry DmC which works really well. However, here’s a tip that’ll not quite break the game but help you out immeasurably, buy the pulse rifles and level them up as fast as you can, there essentially your get out of free jail card as its insanely powerful and can take out most enemies with 1 to 2 hits.

The story (which I wont spoil) however is somewhat short, that is augmented by their being a challenge mode which has you defeating wave after wave of enemies with differing time limits. It’s not exactly “Challenging” but its good for a little distraction.

And that brings me to one big gripe I have about this game, the price. It’s simply far too expensive for a game of its length and let’s be honest a lot of people wouldn’t have even heard of DeadPool before (I certainly didn’t). So the price point of £42 is far too high, I’ll admit If I shopped about a bit I could have got it cheaper but I usually go to the local GAME shop so I just stuck with what I knew. And having to pay top whack is a bit too much, £30 would have been absolutely perfect in my opinion.

Aside from that I thoroughly enjoyed DeadPool, it was a lot of fun and very funny, a little repetitive at times which can be masked at times by the breakneck speed of the campaign. I so want to recommend it but at its full price I just can’t, but if you can find it on the cheap then do it, it’s a great change from the generic grey/brown shooters etc.

You will have a lot of fun.

Oh and DeadPool is voiced by Nolan North, who does a great job as always, since he’s in every game known to man!

Thanks for reading, hope this helped 🙂