So after feeling somewhat ill and a bit downcast, I thought id treat myself to a new game, and it just so happened a game got released that I had had my eye on for a number of months because it looked quite interesting. Resident Evil Revelations, a resident evil game that was originally released for the Nintendo 3DS and after the colossal disappointment of resident evil , this looked like a return to form…. Little did I realise that the utter terribleness and fury of resi 6’s ineptitude would be replaced by boredom, utter utter boredom.

This particular games structure though, is so not suited for a full-blown console release, the game is split episodical where you play very short episodes, much like the missions you get in metal gear solid peace walker (a PSP game that actually translated very well to a console release) except they didn’t make resident evil revelations to incorporate a mission structure, what they have tried to do is shoe horn in that full resident evil experience, all the while splitting that perceived experience up into little 20 minute or so chunks. And in my opinion that does not work, unless the game was made to take advantage of a mission structure like MGS Peace Walker. Which I thoroughly enjoyed and still regard as an utter bargain on the 360 games on demand market place, because it had that hub, that base that you could go back to and build up, and possibly do a few short missions on the go, or like me playing it on the 360 you could play several before thinking about doing anything else. 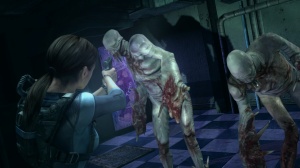 It was absolutely the right game to transfer to a full console release. Where with resi evil revelations you can see the corners they’ve had to cut to squeeze what they can on the 3DS, with 2 paltry game modes (Campaign and Raid mode) and lets face it sub-par graphics for a current gen machine, they are akin to resi 4 HD graphics than anything else. Granted on a 3DS the graphics should be held as spectacular, because what they’ve squeezed out of a handheld is a technical marvel. But with regards to a consoles standards? It just simply isn’t good enough.

I was disappointed with it, although if you have got enjoyment out of it then more power to you, but I was expecting so much more from this. Perhaps I was naïve in thinking it would hold up, but I was hoping this would be the resident evil version of peace walker, but sadly it did not turn out like that.

As for the other mode in the game, its very tedious, its called Raid Mode which is basically replaying the previous levels that you have played during the campaign but with an emphasis on score and lvling up and getting the highest score. Now on paper this sounds ok, almost like a mercenary mode from the previous resident evils, but its so damn tedious that you’ll stop caring about levelling up and getting new weapons and equipment by stage 5. Which is a crying shame as if it was fleshed out more this would have been an absolute diamond in the rough.

I am wondering to myself after the abomination that was resi 6, why did I let myself in for another disappointment? Well I honestly don’t know, perhaps im a glutton for punishment.

Either way, id say if you can get this one on the cheap then maybe it’ll be worth it, or perhaps a rental. Either way think long and hard if you want to get this as, in my opinion it just doesn’t hold up, if you want a survival game on the 360 or ps3 just get the silent hill HD package, which is 10 times better than any resi evil games put together.

Anyway Thanks for reading 🙂