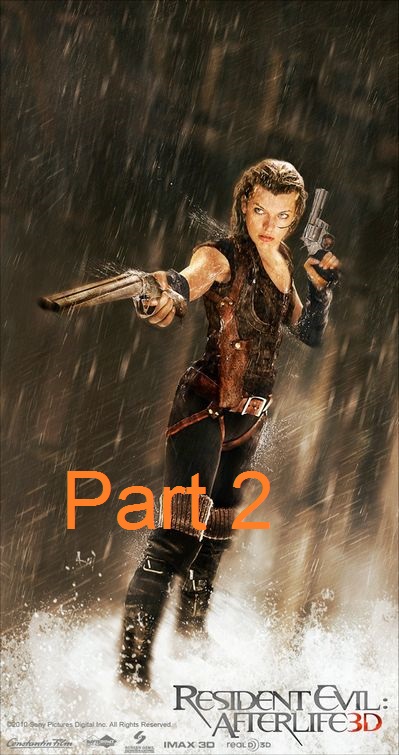 So, where did we get to last time? Oh yes Alice miraculously surviving her brush with an extreme dose of fire and metal to the face during a crashing sequence on a helicopter/plane along with wesker……

We cut to Alice who I am assuming is the Alice from the plane crash because she is now devoid of any superpowers, flying over burnt out completely wrecked cities. She is on her way to Alaska to found the supposed sanctuary of “Arcadia” where she believes that it’s a safe haven free of infection and a guarantee of safety and security (both the same thing but ill let that one slide). As I explained in my extinction review/write-up I am already sceptical about this as I like to follow the zombieland logic of things, where one people from the west say there’s a safe place out east and the people east say its out west it’s all just nonsense. But still going along with this she gets to what I presume is Alaska where she lands among a load of other planes somehow all neatly rowed up like some sort of airplane graveyard. The first thing that strikes you is, that many people had access to those sorts of planes? And where is everybody? It’s strangely quiet for what we’re all assuming is Arcadia, you can tell Alice is conflicted as she sent the survivors from extinction up here, and here is her supposed safe haven…. Its Nothingness.

(Alice in the beginning or as i like to think of her here, Blade Alice!)

So she walks around a little bit trying to look for clues, although that’s a stretch because she doesn’t do much “investigating” I think this is a device to build tension to try to make this seem like y’know a horror film? But again it fails completely, thankfully the writers are learning to do this less and less though, so gold star writers! The prime example in this scene of that is, we see a flash of something rush past the camera as Alice turns to see what it was, nothing, so again the same thing happens but then about 30 seconds after that Claire Redfield attacks Alice while having a “thing” attached to her chest (much like the thing controlling Jill Valentine in Resident Evil 5). It seems to give her extra speed and strength? But even powerless Alice gives her a few punches and a power kick to the chops and knocks her out, all in a days work eh. Alice also removes the device from Claire’s chest with no trouble whatsoever (Those who have played Resi 5 will know what a bastard this was to do in the game so im calling bullshit on this).

To cut a long dull story short Clair has amnesia presumably from the device previously attached to her, how? We don’t know that and never will at least not in this movie. And we see our two heroines in the plane that Alice was flying before, well done on getting it to fly again off such a small runway good work….. Anyway they fly over more dead lifeless cities I assume to try to make us feeling something other than boredom and impatience for something to *happen* but then! We do! Another small group of survivors see the plane and try to hail it to come save them, they happen to be on top of an absolutely ginormous prison fortress and it happens to have a roof that is just about long enough to land a plane like the one that they are flying. So that’s what they do, but just barely nearly teetering off the edge until the new survivors drag the plane back to safety (It’s also safe to say they surely can’t take off again can they?) and also the fact that they’ve stranded themselves because of that fact and also the new survivors are still screwed because how the fuck can they fit them all in that plane? Even as one survivor suggests take multiple trips to Arcadia (which is a huge boat/tanker by the way, surprise) there’s no way you could take that plane off again without turning it into a pile of smouldering wreckage.

*Oh and according to my note Milla Jovovich is still smoking hot….. I concur*

The new survivors cover the usual spectrums of each ethnicity (if that’s the right term). The token black man who is a former sports star, and is kind of cool actually, there is also a bit of foreshadowing of a bit of a romance developing already between him and Alice. We have the japanese guy who seemingly does nothing. The twat who is a mustachioed white guy who looks about as shady as you can get, plus the actor they use is almost always cast to play bad guys in movies so that’s another reason not to trust the wanker. There is also the old guy keeping sentry over a “mysterious” prisoner. The old guy is the first to die and ill tell you how I knew that…. Because they spend hardly any time with him giving him any type of characterisation or anything like that bar one scene where Alice catches him spying on her as she’s about to take a shower, so we’re glad he dies because he’s a twat too. And lastly there is the super hot chef/cook who for anyone who has seen the tv show “The Inbetweeners” will know is played by Neils sister-Kacey Barnfield, she doesn’t do much except look gorgeous.

(Finding interesting images for this movie is hard!)

The *mysterious” prisoner is an important character, well as important as a resident evil movie can get. It just so happens to be Chris Redfield played by Wentworth Miller (The dude off prison break i think?) i admit i was looking forward to seeing Chris Redfield in one of the films because i actually like the character from the games, especially from Resi 5 as he is hilarious with his insanely proportioned super steroid enhanced arms and also…. Punching a huugee boulder into lava (if you have completed the game you’ll know what I mean by that one 😉 ). But he gets played so serious and down trodden in this film, its like they miss what Chris is supposed to be, a stupid hulk of meat who can kick all kinds of ass even by breathing on them. But no, he gets played super serious and like he has a dark past and that he’s done some bad things man! It’s at this point i wonder what a Chris would have been like if they had brought him back during Resident Evil Apocalypse? Now that would have been awesome.

Right that’s your lot for Pt 2. Pt 3 will be where the story starts to take hold (lol) and we find out about the boat safe haven “Arcadia” and other… Stuff, i hope you join me next time!

Thank you for reading