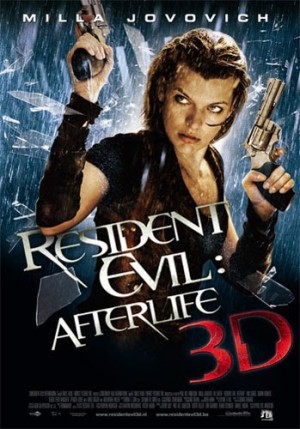 Well after being taken to heaven with bioshock afterlife i am now being taken back down to earth with a bump with another resident evil movie….

This at least has a chance to be better than extinction, as we open up in a bustling Tokyo city where it doesn’t seem to have been touched by the T-Virus, odd you might think considering the previous film had said that the entire world had been ravaged by it, but here we have Tokyo bustling with life with all their neon billboard signs working etc so doesn’t that strike you as a bit odd? The answer, is no because this is the city pre T-Virus breakout, now it isn’t clear whether this is ground zero where the outbreak originated or it’s just how it started in Japan? Again it’s not explained very well, are you noticing a pattern in these films i.e the less explained the better.

But whatever we’ll roll with it as the setting is at least interesting to look at even when we cut to present day Tokyo which of course has been completely ravaged by the virus, so here we so two umbrella snipers taking shifts I guess to try to clear up some of the “biohazards” in the vicinity, and I have no problem with this, it sets the tone and setting which is a lot more than we got in extinction so already we’re on the right track. So the snipers are happily competing who gets the most zombies kills etc when one goes out of contact (we get a brief cut away of his garbled short scream indicating he may have been killed by someone… or something! And his mate keeps raising him to no avail…. Then all of a sudden the thing that got his buddy jumps down and eats/kills him too! Still no idea what it is but a little bit of action to start off and at least a tiny attempt at tension and horror is appreciated even though it fails I can still like that they tried, gold star guys!

We then cut to the inside of the Tokyo umbrella HQ which is of course untouched by the virus *natch* and we get our first glimpse of the main villain, (apart from the zombies) who of course is Albert Wesker who still looks incredibly stupid but at least he looks a lot more like the clichéd game version than the shitty corporate type from extinction, so already my hopes are getting raised. He is talking to some guy about…. Stuff, im sorry I didn’t fully catch their conversation as really it had next to no importance about the plot of the movie so i tuned it out. We then get alarm bells ringing in the HQ so we see a load of hapless goons setting up in neat rows (presumably what is loosely defined as defensive positions but really it’s for convenience for whoever attacking), now Wesker doesn’t look too perturbed by it as it seems like he was expecting this, you can already guess who it might be….. That’s right Alice! (It seems she was the one who killed the snipers not a monster as we were kind of lead to believe).

Alice however has had a bit of a transformation from a confused budding super powered human from the previous films to a female version of blade (the daywalker from the blade films? IMDB for more info), im not kidding she looks so much like she’s been ripped straight from a blade film you can’t not have your mouth open wide in surprise as admittedly that is a twist but not one i was fully expecting. She is also tooled up to the nines with swords and guns, as she slices and dices her way through the afore-mentioned hapless goons who are there as practice dummies to show off her super powers and skills which are entertaining to look at although at a few points in the action you feel that there showing off a bit rather than enhancing her character through her bad assedness. So she goes about wrecking everything there…. Which she does, very well in fact so wesker in a questionable move decides to self destruct the entire facility, smooth, as he’s escaping of course in a helicopter/plane leaving everyone else in the building to get blown up, but that’s what he does because he’s eeviilllllll……

So then we get Alice who seemingly has the jump on him asking, “any last words?” while having a sword to his throat which is a cliché in of itself because come on wouldn’t you just cut him without saying anything? It would be the logical thing to do and we could cut down the run time to this movie by about an hour. But no Wesker moves with super speed! That, isnt explained why he has it and injects something into Alice that neutralises the T-Virus in her body that effectively renders her human again without the super awesome power. So you would think she is at the mercy of Wesker right? And is totally and utterly boned? Of course you do but that’s not what happens, the plane ends up crashing because…. I don’t know, act of god, and we get a hilarious still CGI shot of Alice and Wesker when the plane is in the process of impacting into the ground.

(Bringing in the zombies from Resi 5 now I think)

I have to admit something here though I think I missed something after this because then we get Alice flying a plane over ruined cities presumably still on her way to Alaska, at first I thought hey maybe this is one of those Alice clones from extinction but no this seems to be the underpowered human Alice that was previously on a plane crash ready to receive a face full of metal and flames, which no one could have possibly survived surely? I don’t think it’s ever explained in the entire movie how she managed to survive/escape, we’re just meant to accept that it happened and move on….. *sigh*