Part two of the review continues…… save me!

Well continuing off from before, a night to sleep on it hasn’t helped my overall feeling towards the movie that it is a cheesy completely terrible movie that’s worse than “Doom” although that had the saving grace of having the rock in it… Who is awesome. But I digress.

when we left our heroes were contacted by the wheelchair bound Dr Ashford who offers to help them escape the sealed city if they can save his daughter, which is fair enough yknow he’s a big wig so you’d think he has some clout so I didn’t really have a problem with that particular plot point. However my “hang up” is that also Dr Ashford informs them that umbrella…. Or the government, I could never tell which one, is going to nuke the city to hopefully erase the T-Virus infection and since most of the population is now zombified this seems if not a bit an extreme at least an understandable action. But then Jill asks the dumbest and most pointless line ive heard in a while during a film, she asks, “what yield is it?”….. Lady its a fucking nuke! It doesn’t matter what yield it is your going to be atomised since its not a gigantic fucking city where you can just easily seek shelter from a bloody nuke god damn it!….. Ok i went off on that a little but that bit just pissed me off as it was so blatant the writer had to have written it as a joke.

After they get through that…bit *eye twitch* they get spotted and attacked by the tyrant who is actually the dude from the 1st film…. some vague love interest for Alice but really by the time this film came out I don’t think anyone really gave a shit who he was, but he looks pretty cool now. Although I object to the almost terminator like visuals he has when we see the action through his view-point (as he is being controlled by umbrella) but that’s a minor quibble admittedly. He is equipped with a fuck off great mini gun (natch) and I have to admit its pretty cool when he uses it, but then Alice vaguely fights him before then deciding *Fuck That!* and runs away with the tyrant in hot pursuit in your standard chase sequence. 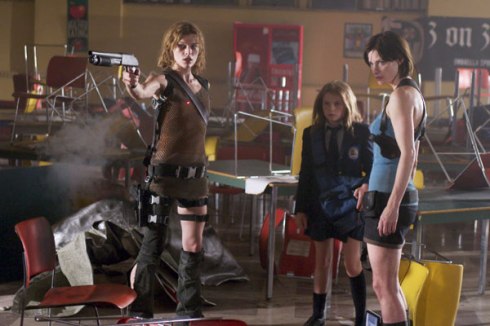 (Alice on the left, Jill on the right and Angela Ashford in the middle)

This all culminates in Alice running into a building and jumps into what I assume is a laundry chute into a laundry cart, so knowing the tyrant can’t fit into it, he fires a fucking rocket down there, so Alice takes cover from it in the fucking cart! From an explosion that happened mere inches from her! I had no idea that laundry carts were built to resist buggeringly big explosions for fuck sake. But it succeeds in losing the tyrant as if I were it I would have thought the bitch would be in a million pieces by now, however for the miracle plasticky laundry carts shes fine and with seemingly no injuries or scratches whatsoever!….

But stuff like that would be included in the game so, free pass on that one as its video game logic at its best. We then cut to the umbrella SWAT team… remember them? I wouldn’t blame you if you didn’t, they are trying to find a way out too, and oh yeah! One of their team was bitten but they seem totally oblivious too it, again you’d have thought they would have learnt by now that guy is fucked sideways but they bring him along anyway, stupid twats. I think one of the reasons they occasionally cut back to these guys is to get to know the Carlos character a bit better as you see him in the next film too…. Even though he gets bitten in this film *spoiler alert* although all is not lost for him because he’s a main character and not expendable like the various extras!

So anyway there’s now only 2 SWAT guys left and Dr Ashford phones them too to get them to also help rescue Angela his daughter who is trapped in the local high school. So you can see what is going to happen…. There going to meet up eventually, but first we have a pathetic jump scare and a dumb ass reporter to kill off! The reporter thinks she’s found Angela (the little girl) and creeps up towards her calling her name all the while the thing she thinks is Angela doesn’t respond and is rocking back and forth…. Yeah shes rat food and then when the predictable reveal happens a ton of zombie school kids charge in to eat her stupid ass. My question is where the fuck did they come from? Surely they would have made enough noise for people to hear them? Why did it take a cue from some little zombie bitch for them to start charging? Anyway one lame jump scare and death later.

(The reporter chick, Who contributes nothing except during her death scene….)

They find Angela in the same class room as the bitch that got eaten, which made me laugh at the irony and grew my sense of fondness for Angela.

The school also is where the last remaining SWAT and survivors meet up as we all knew they would, and so they find her and try to get out of the school without attracting any more attention…. Which they fail miserably at. The russian member of the SWAT ends up kicking the bucket which I found sad because I kind of liked him even though he had absolutely zero characterisation at all and for all intents and purposes was a prime candidate to get royally boned.

This time the type of death is mauled by Zombie dogs which provides the 2nd best line of the movie, as he’s struggling with the first one (there are multiple dogs) he tells…. Whoever the adult that was with Angela (i forget and can’t be arsed to look it up again) to “Take The Girl! I’ve Got This BEETCH!” and the accent made it for me it was absolutely hilarious, horrible russian accent just made it for me entirely! Why they never get real russian actors in ill never know.

And as always thanks for reading