Why Am I Playing This? Aliens Colonial Marines Edition 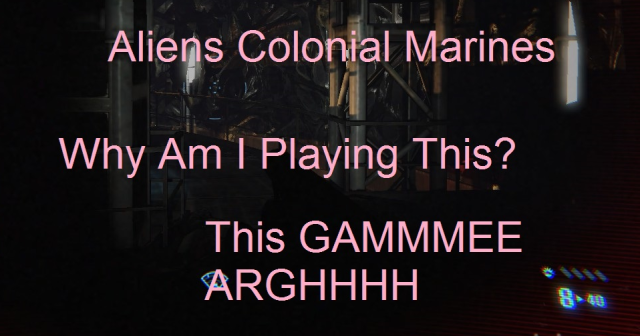 Im a bit late to the party on this but I recently picked up colonial marines on the cheap, why? Because I was bored and I felt like a daredevil buying a game everyone told me not to! Also perhaps because I’d heard that the multiplayer is meant to be pretty fun so that was a sliver of justification for my purchase. Although I have to admit I bought the pc version as I couldn’t bear the embarrassment of having this game on my gamerscore/gamercard for everyone to see on my Xbox live gamertag so I still had some massive hangups about the game.

So with some trepidation I booted the game up and got to it, grimly selecting the hardened difficulty and hoping to be secretly blown away by a hidden gem that’s been hideously misunderstood, and was I?

You get treated to an intro which is dull at best and incredibly tedious at worst, with no energy, no personality and absolutely no characterisation. Its like babies first story that you have to write back in school when you’ve only just learnt the basics of how to write english. It’s so dull it made me want to quit right there, but I didn’t I soldiered on and oh wait did I mention the graphics? Now im willing to admit it might be because my laptop is shit, but the game is fucking ugly and has a film grain filter on the screen to make it look even worse, I couldn’t find a way to turn it off either so your pretty much stuck with it.

(They were actually talking to each other while not facing each other, and their hug animation had them hugging air….)

The voice acting with is awful too, no one really putting any effort into it, no one really trying to live there character it’s all just so phoned in and utterly soulless, id have more belief in the characters if they were all voiced by a robot. I can’t stress how utterly soulless this game starts, even with the copious videos from gearbox saying how much they love the aliens franchise etc, their passion” completely fails to turn up most likely hiding with their own franchise “Borderlands” a much much much better game.

Finally though we get into some gameplay, and yes the guns and the sounds are actually very good and sound like they should from the films. However that isn’t exactly hard to do is it? I mean rebellion did that in aliens vs predator (a slightly better game with some quite gaping flaws but it had potential) so a much bigger studio like gearbox should be able to do the authentic visual and sound designs in their sleep right?

So you make your way to the ship called Sulaco I think (im not sure I was only half paying attention to the story at this point) and the first signs of things going tits up is when the means of getting from ship to ship the “umbilical cord” gets mysteriously trashed so you have to run your stupid arse as fast as you can into the derelict ship before you get thrown into space. So I managed to do this and when the airlock behind me shut and re pressurised everything was quite dark so I thought ok there must be flashlight so instinctively I pressed the F key, y’know F for flashlight you can see my thinking here. But no the F key fires the underslung grenade launcher attached to your pulse rifle and as i was standing in front of a wall while doing this I got blown into a million pieces and splattered against the wall, slightly embarrassing if I do say so myself *ahem* (although bear in mind nothing happens to the player model you just rag doll down to the floor).

(This is how they ended the conversation….. “Did i say something wrong?”)

That brings me to another fault the controls are awful, i know you can rebind them this being the pc version an all but surely you expect competent controls off the bat because hey, they havent been working on this game for like 6 fucking years have they?

Now the most publicised flaws this game has is the god awful enemy and friendly A.I. And i can confirm it is awful and breaks what nano-milimetre of immersion you have while playing. The Xenomorph A.I. sucks an STI infected dick, they often avoid stealthily hunting you, instead they go for the rush you head on approach, with all the subtlety of…….. something that’s not very subtle. You get my point though this is not Aliens this is more like a tarted up version of doom and even in doom the enemies don’t rush you. When your A.I. gets beaten by a fucking ancient shooter take a good long hard look at yourself gearbox and co developers!

More examples I witnessed were aliens bursting from vents and then…. Waiting until you spot them then they think about attacking you, or an alien in the middle of a charge just stops and looks at me, perhaps thinking it wants to be friends? Then I killed it, hey might aswell use the awful A.I. to my advantage eh. The absolute worst example on both sides of the A.I. spectrum is when i saw an alien and one of my team just standing next to each other as though they were in mid conversation, it’s just a complete mess, although i shouldnt be surprised considering the amount of developers that gearbox out sourced for the game. What was I expecting, but a jumbled up mess with apparently no one leading them to one over arching goal/idea to bind all the bits and pieces together.

It boggles the mind, but im digressing a smidge. As you make your way around similar looking corridors fending off attacks from lemming style aliens (as that’s all you do really) you get to the cargo bay where you have to defend a tiny section of it while one of your team clumsily bypasses a locked door so you can escape. This is where it gets to another level of bull shit because the rushing tactics of the aliens is a bastard to deal with when your kind of confined to such a small area, your team mates are no help if your playing solo as there dumb as pile of rocks and barely fire at all choosing to be human meat targets for the xenomorphs.

So when you manage to do that and traverse some more linear shitty corridors *poof* end of level, and thank christ for that. I’ll admit there might have been more to it but I had completely stopped giving a shit.

There is one redeeming feature though, and that is the upgrade and leveling system which I suspect is tied into the multiplayer aswell. In the function of single player upgrades you can purchase weapon upgrades and add ons etc to make it easy to dispatch the slobbering monstrosities. Although so far ive found the pump-action shotgun to be the most effective out of everything on offer so far. There are also legendary weapons that are secretly hidden amongst levels, and on the first one I found Hick’s shotgun and while being mildly excited about that it quickly turned to apathy as the only difference I could see was cosmetic and no real change to the weapon’s effectiveness, so I think that’s just put in there for the hardcore fans.

Strangely though I think I will go back to play more of it at some point, because on some weird level I had a bit of fun with it which I solely put down to the challenge system where you can complete different challenges for more XP, kind of like the daily, monthly challenges like in halo reach etc. In some ways it gives you different ways to complete the levels, so im only to happy for the variation and also theres morbid curiosity involved too as I don’t think ive ever played a game this bad, this broken before so im going to explore it some more and write-up each individual level as I go to try to uncover the madness behind the game and its design.

Hope you enjoyed it

P.S. Forgot to mention there’s a moment where your so-called buddy is infected with an alien, bursts out of his chest so he blows himself up… While your still standing next to him totally healthy…what….an…..asshole.