trying out the wii, memories and thoughts about it

It was during my happy time with the 360 i ended up getting a wii for myself during christmas as i finally caved and thought, hey ill try it out and see what the fuss was about as before id dismissed it as a casual gamers haven (which it is but i thought id give it a shot anyway)

I bought Okami and house of the dead overkill with it, ill quickly run through house of the dead first, it was funny in a juvenile sort of way because you play as the secret agents or police i wasnt sure one of them said/shouted fuck after every other word and the other was his exasperated partner. The humour came really from the one guy shouting motherfucker! every other time which did grate after a while once the initial giddyness of “hehe he said fuck” wore off. The gameplay was your bog standard “light gun” game but you use your wii motes like guns which was kind of fun to begin with but after 10 minutes it started to lose its charms as you look more and more like a retard holding the wii motes like guns in front of the tv.

Now i am being a bit harsh considering its the limitations of the genre as theres not a whole lot you can do with it.

Onto the main course of Okami which became the only wii game that i loved and played again and again, i had heard about it on the ps2 but never played it, id only ever seen it on screenshots. They were beautiful of course using an art style that was utterly unique and incredibly beautiful and striking and any other positive descriptive word you can think of!

The story for me was utterly compelling aswell, it being based off japanese legends and myths (you even play as the sun goddess amaterasu in white wolf form) which is a much more appealing character to play as then say an anonymous grunt in Cod or a little elf boy in zelda.

You use the singular analog stick in the nunchuck to control movement, and the buttons and wii mote to control the camera and the special powers you collect, as the wii mote imitates a paint brush “the celestial brush” which is what you use to unleash your powers painting out the simple symbol to for example change night to day, bring a bomb to life and stuff like that. There isnt any other system like that out there it was utterly original and more importantly fun to use although with the limitation of the wii mote it could be hard sometimes to get the game to recognise the symbol your writing, although once you work out what works 99% of the time youll just do that.

There is voice acting in the game…kind of as you get the text bubbles but the voices that come out are utterly gibberish like the sims garbled rubbish, however i think that works really well considering the subject material, could you ever find the voice actors to adequately portray gods? as it would have the scope to really ruin the experience, a quick example of voice acting ruining a game is shenmue 2 for the xbox, they dubbed in english voice over for that version (they had japanese VO for the dreamcast version with english subtitles which i prefer a million million million times over)  and it ruined the whole feel of the game, hearing everything in english just broke the immersion especially since it was bad voice acting it only served to completely and utterly break it. Didnt stop me completing it several times over but id always try to tune out the especially awful parts of the VO.

Anyway my point is in okami having that non descript gibberish as the voice acting could allow you to imagine a voice for the characters, to let your imagination fill that part in which in my opinion was a very smart move on the developers part and agree with it 1000%

This was the game for me that signified, games could be like art, it could provoke real emotion out of you and also be beautifully constructed and be an utter feast for the eyes at every turn. 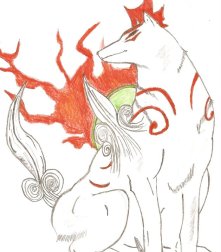 (something i drew earlier 🙂

p.s. the soundtrack was awesome too 😀